Continued from The F Word (Episode 2): Harassment and #killallmen

K: You said something very interesting Henry. You talked about men asserting their power over women to affirm their masculinity- and the idea that women don’t have control over their bodies. Yovanka, your fashion sense- what you wear; do you feel like you have control over that, as a woman? Say if you went to an event together and she wore a dress which you know is very provocative, would you have an issue with that?

H: In reference to the learning-unlearning process, it’s quite sexist I think and I see myself at sometimes subscribing to that school of thought. But having said that, I also understand that I have no legitimacy to tell my partner what to wear- but that doesn’t mean I won’t think it because my instinctive reaction is ‘this is provocative.’ I would dare not say it. But the mere fact that I think it’s provocative in and of itself is a problem I need to question. To act on it is a whole different thing. That’s when you are asserting yourself; that’s when you are dictating or imposing yourself. I would think it but I will not say it; and that in itself is problematic in its sexist respectability politics.

Y: First I wouldn’t say I’ve never worn something provocative. I don’t think I’ve even wore something provocative around Henry [Yovanka laughs]. But depending on the space, I don’t think I would feel comfortable because I don’t think that I’m the kind of person that can handle certain situations whereby men invite themselves to say certain comments or approach. That’s not something I can handle so in that sense I don’t feel I have control over my choices. Because sometimes I have to be strict; and I think many women don’t really think about it, but I do restrict certain choices knowing where I’m going to go. And I think it’s quite uncomfortable to be with a partner where you’re together and say a guy comes by and tries to hit on you and your boyfriend feels that he has to say something- to assert his masculinity in front of his girlfriend to tell that guy ‘she’s mine!’ like it’s ownership. That’s not a situation I would be comfortable with.

H: This whole thing about control over our bodies; it’s not just a gendered thing. The market forces us to question our choices. All these ideas that the system of production has produced; all these ideas about looks, presentation, spaces where you present yourself etc. A hipster  can be very conscious as to what they should wear [Yovanka laughs]

Y: But you wouldn’t go to the office, perhaps , as a hipster.

H: Although women have it worse, it’s not just a gendered issue. It also covers race and culture. If I am a Muslim in a British society, I have to be careful in terms of the aesthetics that I project. If I am a black activist, I have to be careful because I would not be accepted in certain spaces; I’d be marginalised and alienated as a result of certain ideas of what my fashion sense stands for.

K: You only have to look at the media and celebrities like Miley Cyrus; from country girl to Wrecking Ball [Yovanka and Henry laughs] As I’m learning more about feminism, I’m understanding her reasons for making that choice. It maybe her trying to reassert or gain control over her image, over her body, that she felt the industry and the record label were oppressing. I understand why she made those choices, it’s just whether or not as a parent or as a friend I would agree with those choices. You look at Will Smith and Jaiden Smith and the boundaries Jaiden is pushing with how he dresses and how he has become the face of Vogue where he is wearing a leather jacket and a skirt. I remember reading an article writing that Will Smith’s initial reaction to Jaiden was ‘err…you’re not wearing Womanswear’ but then him realising that as a parent I can’t enforce myself on him because if I do that it will affect him- most likely in a negative way. But it makes you think; men wearing skirts that’s not anything new. You look at certain cultures like the Scottish kilt. There is a lot of unlearning, cultural appropriation and being taught how modern men and women should dress. And how individuals are breaking that.

H: I get the individual resistance but in the case of Miley Cyrus, the fact that she took on this very sexualised image which appeals to what Bell Hooks considered to be the patriarchal pornographic gaze. That’s what makes it problematic. Miley Cyrus is not resisting; she’s perpetrating those ideas. And it creates a model where others think that all forms of resistance is sexualised.

K: Which is not true.

H: So Miley’s resistance is still within the boundaries of patriarchal structures.

Y: One problem that I have with how Miley Cyrus went about changing her image is that she does it from a very privileged position. What I mean is racial background. You mentioned Jaiden Smith. Because Jaiden Smith is a black guy there are certain expectations and respectability politics which means you cannot push the boundaries the way you really want to. But for many years, because black bodies tend to be more sexualised than white bodies, when you see black women doing the same as Miley Cyrus, people have this impression that this is porn, this is bad taste. Rihanna has this new song called Work and she is wearing some sort of string vest dress in the music video. And Bella Hadid was recently wearing exactly the same dress. A magazine ran a story saying how amazing her fashion choices were but another magazine said that Rihanna looked low-level in the dress. Bella Hadid was given props for that but when a black woman does it, no one finds it extraordinary. What Miley Cyrus did has reminded me of how privileged she is. I have not seen many black musicians do the same. Nobody talks about Nicki Minaj’s Anaconda pushing the boundaries of black woman’s sexuality.

H: You might see me here as old fashioned and very controversial. But my question is do women need to sexualise themselves and their bodies to assert their sexuality? Is it required that the black woman’s body which is already heavily fought over [Kelechi laughs] which has been loaded with all sorts of denigration, do black women- in fact all women- need to sexualise themselves to reclaim their bodies?

Y: There’s no straight answer to this question simply because it depends on each woman you talk to. For me, reclaiming my body doesn’t mean taking twerking classes. Recently, when Beyonce dropped her visual album Lemonade, Serena Williams was seen twerking in the video.

K: And there’s also a Youtube video of Serena teaching white people how to twerk.

Y: How people talk about Serena has always been derogatory such as ‘she looks like a man.’ They almost take her femininity away because she does not conform to the idea of a woman  ie. thin, white etc.

Y: When you talk to men, most would say ‘yeah she’s got a bum but her face though’

Y: Her face is not again your typical standards of beauty- whatever that is. And many people were really excited to see Serena in the video because she was almost kind of like ‘ you know what you think about me. I don’t care about your standards of beauty. I think I’m a woman, I’m twerking and having fun in this video.’ people saw that as her reclaiming her body and celebrating her femininity that has been denied to her. It’s sad because I think black women have been denied control over their sexuality so sometimes it seems that black women are trying to assert their sexuality to say ‘I have control over this.’ And by her twerking, it almost seems that that’s what she’s trying to say but at the same time we’re further sexualising ourselves because we don’t control the images or the narrative.

K: So it’s about controlling the images and the narrative. It’s perhaps finding different ways or methods for a woman to assert her sexuality. It’s about not using their tools to express yourself. So no more twerking; your against twerking Yovanka?

Y: I’m not actually. I would say for a women looking to reclaim her sexuality, whatever floats your boat is great. I won’t stand and say that twerking is not because I’m not that person and I don’t have those experiences. 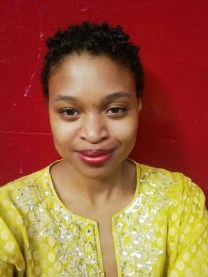 Check out the other ticketed events

The Immigrant play by Joy Gharoro-Akjopotor

There will also be a number of free workshops and events taking place at the festival: http://bit.ly/AWworkshops

The British Library is for YOU

A Child’s Eye View of Corruption