It’s summer again, if briefly, and once more we have had the great pleasure of hosting the annual Africa Writes festival (5–7 July 2019) here at the British Library.

Among the gems of this year’s festival was an invitation to ‘Reimagining the Gods’, in the company of writers Inua Ellams and Sitawa Namwalie, whose creative works have been inspired by deities and beliefs from Nigeria and Kenya, and academic Louisa Egbunike. I was both pleased and intrigued to be asked to open this panel with a short introduction to the British Library’s collections on African cosmologies. This is of course a huge subject, encompassing a very wide range of belief systems, and going far beyond what is classified as ‘religion’ in European terms. The holistic nature of African thought has meant that relationships between gods, spirits and people, and the dead and the living, were and are woven into everyday practices and a wide variety of rituals.

So what does the British Library have on this subject? The answer, as ever, is ‘rather a lot’. To illustrate the kind of material we have, I’m focusing here on the theme of the Yoruba gods and other religious practices. 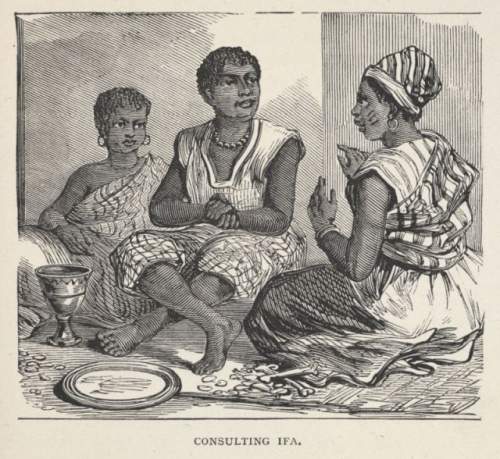 The Yoruba deities of Nigeria and Benin belong to one of the most famous African religions. The gods (òrìṣàs) include among their number Òrúnmila, god of wisdom and divination; Ògún, god of war, iron, the hunt and the road; and Èṣù, the trickster-god. They were and are part of a wider set of beliefs and practices including the Gẹ̀lẹ̀dẹ́ masquerade, which ensured the fertility and well-being of the community by focusing on women, and a system of divination called Ifá. The British Library collections include, as you might expect, accounts of Yoruba rituals and beliefs, as well as images of items used in religious practice, made by Europeans in West Africa before and during the colonial period. 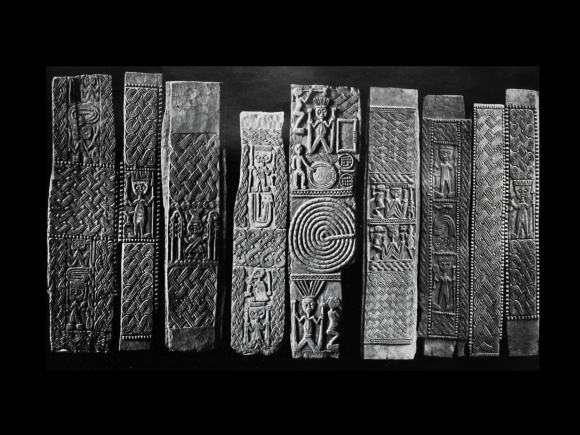 The early writings of Europeans are of course often problematic and biased – missionaries in particular saw African religion as ‘heathenism’ – and the image of Africa and Africans they portray is often negative or inaccurate. Europeans also, generally speaking, benefited from unequal power relationships which facilitated their research and (in some cases) collecting. Nevertheless, when read with a critical eye, many of the works of such observers remain important, if always debateable, sources of knowledge on these subjects.

On the west coast of Africa, a Western-educated African elite flourished, and published books, from the mid-19th century. For example, the Rev. E.M. Lijadu (1862–1926), writing in the early 20th century, was a figure of major importance in recognising and promoting Yoruba religious beliefs and practices. We hold several of his titles in Yoruba.

Oral texts were and are central to Yoruba religious practices, as in other African religions. The BL’s collections are very strong in this respect. Among other things, we hold recordings made by academics based at Nigerian universities in the 1960s and 1970s.

Peggy Harper specialised in dance, and a clip from her film (with Frank Speed) of a Gẹ̀lẹ̀dẹ́ ritual is online here. The recording below of a group of male priests (babalawo), led by Ayotunde Aworinde, was made by Robert Armstrong at the University of Ibadan in 1965, and transcribed and translated with Val Oyeyemi and other Nigerian colleagues.

With the independence of Nigeria in 1960, and the rise of a strong university sector, academics and others increasingly published on aspects of Nigerian culture, including religion. 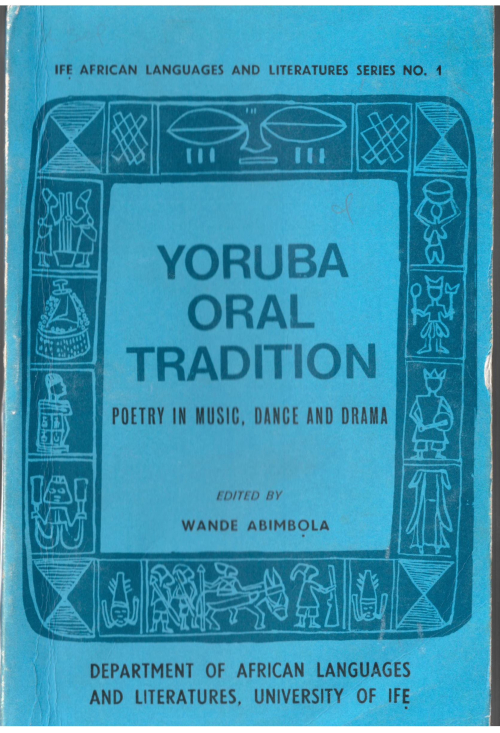 Generally speaking, we hold many relevant works produced by the academic sector, in Nigeria, the UK, the West, and many other places, as well as works by scholars and commentators from beyond the academy. Anthropologists were particularly important in recording religious practices. Most of these texts are in English and other European languages, but there is also a significant number in Yoruba. We also hold books, articles and journals about the migration of Yoruba religion to the Americas, where it was re-established by enslaved people in systems such as Candomblé in Brazil. 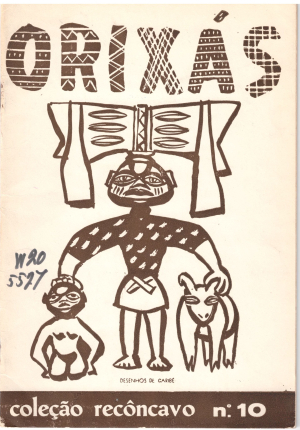 Artistic interventions have been a popular way of engaging with ideas about the gods. Wole Soyinka’s poem Idanre, which takes inspiration from the god Ògún, was commissioned for the Commonwealth Arts Festival of 1965, of which we hold the papers. These include Soyinka’s typescript, together with his autograph revisions, drawings and musical directions. The manuscript is unusual in that we do not hold many original documents by African writers. We do, however, have a very extensive collection of published works of fiction, drama and poetry, as well as books illustrating and analysing responses in the visual arts. 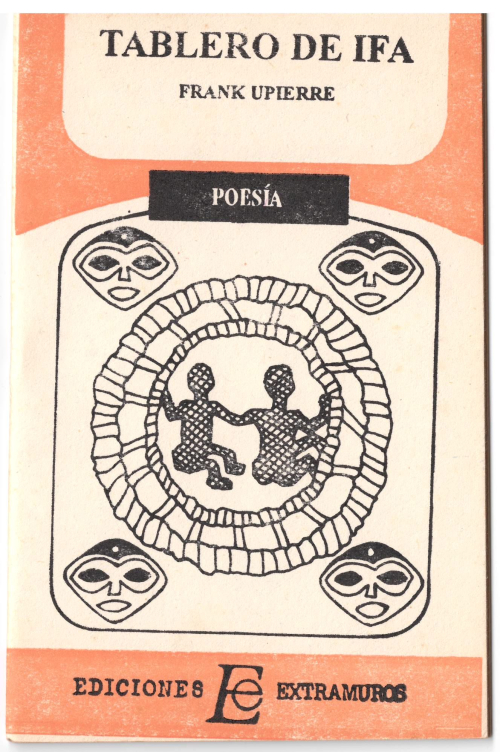 The Yoruba material is only one example of our very rich collections relevant to this subject, published across the world, and crossing many disciplines. Scholarship on Yoruba belief systems is particularly extensive, but for most subjects it’s likely that the researcher will find information.It is also worth remembering that there are many, very different, forms of religious belief in Africa. If investigating, for example, the beliefs and rituals of the Khoe and San people of Namibia, Botswana and South Africa, researchers would want to look at older and new material – the new often in dialogue with the old – and think about the ways in which archaeology, rock art studies, history and anthropology come together. Trance rituals, for example, are represented in rock art. Our sound collections in this field are rich – see for example the Emmanuelle Olivier collection.

Researchers could also look at publications from organisations representing Khoesan people, as well as engagements through literature and the visual arts.Finally, to research our collections:

Enjoyed this article? Show us some love online by:
Blog

Lockdown Launches: 6 Book Releases You May Have Missed